Gary Hustwit is an independent filmmaker and photographer based in New York. He has produced 13 feature documentaries, including the award-winning I Am Trying To Break Your Heart about the band Wilco. In 2007 he made his directorial debut with Helvetica, a documentary about graphic design and typography. The film marked the beginning of a design film trilogy, with Objectified, about industrial design and product design following in 2009, and Urbanized, about the design of cities, in 2011. The films have been broadcast on PBS, BBC, HBO and television outlets in 20 countries, and have been screened in over 300 cities worldwide. Gary’s most recent film project, Workplace, about the future of the office, was commissioned for the Venice Biennale of Architecture and premiered there in 2016. He is currently completing a feature documentary on designer Dieter Rams.

In 2016 he founded Scenic, a virtual reality content studio based in Brooklyn. Scenic’s first slate of VR documentaries was recently released in partnership with The Wall Street Journal and Google. His work has been exhibited at the Museum of Modern Art New York, Smithsonian Cooper-Hewitt National Design Museum, Design Museum London, Storefront for Art and Architecture New York, among others. 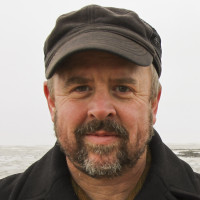